The Hotel at Midtown, a 55-room boutique hotel that sits atop the elite, luxury tennis and fitness mecca, Midtown Athletic Club, is the only one of its kind situated between Bucktown, Roscoe Village, and Lincoln Park. Norcon began construction on the 212,500-square-foot project that encompassed the athletic center, adjacent parking garage, and hotel in the spring of 2016. The club features an indoor and outdoor swimming pool, a full restaurant, yoga studios, group fitness theaters, a 10,000-square-foot cardio fitness floor, a 40-yard indoor turf sports field, a full-service spa, a hair salon and barbershop, locker rooms, sauna, steam rooms, a childcare facility, a retail store, a tennis lounge, 16 indoor tennis courts, and all finished in rustic, high-end finishes. DMAC, the architect and designer, tied the style and finishes from the club into the hotel creating a high-end, urban experience with tons of natural light from the glass curtainwall on the north and south sides of the building. There are four featured suites still under construction (one designed by Venus Williams’ design-firm, V-Starr Interiors) and the roof deck will open in the spring of 2018.

Illume Condominiums will reach its full height this week and “top out”; a phrase coined by the construction industry to indicate when a building has reached its highest point. In the case of Illume, a post-tensioned concrete structure reaching 124 feet and 10 stories, the topping out has been accomplished by pouring 9,700 cubic yards of concrete, over 670 tons of rebar, and 178,800 pounds of steel cable. The project team, consisting of Norcon, LG Development, Pappageorge Haymes Partners, Cary Kopczynski & Company, and Catapult Realty, broke ground on 255,100-square-foot structure in December of 2016 and the project is set to be completed in the summer of 2018.

In addition to Illume, Norcon topped out on their own office expansion last week; a 5,600-square-foot addition that will include 15 new office spaces, two new common spaces, an extension to the roof deck, a green roof, and the exterior clad in fiber cement panels. 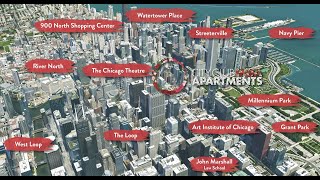 Cladding On The Rosie Nears Completion

Will Chicago theaters redesign seating for the COVID-19 era? Not likely.